Why the Alliance for Audited Media is a Joke

Last month, the Alliance for Audited Media released its latest circulation report which was hardly a blip on the radar screen for most of the general public- but for this print media buyer, (and former print ad rep) it was a big deal. (I should probably warn you - this blog may be considered a blant). The report from the effective governing third party of the industry showed significant growth - we're talking in the 76% to 94% range - for some of the most recognizable newspaper brands in the country, like USA Today. So what's my problem? This is great news, right? Newspapers are not dying - they're growing again - yippee! Well, my problem is in the reporting. If you dig into these statistics like Media Life has done in this article, you will see there are major issues with how they are arriving at these "gains." 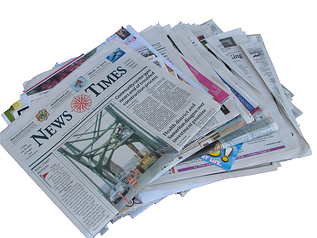 Ignoring the upbeat headline that belies these problems, we see that the gains AAM reports were due to newspapers counting "branded editions" in their circulation counts - which inflate the numbers way beyond reality. They started doing this a couple of years ago in their semiannual report, but many of these papers just started including the branded editions in their totals, no doubt to hyperinflate their numbers. AAM defines these branded editions as any publication on same stock of the newspaper, publishing at least weekly with editorial content. These special editions can be anything from a coupon supplement to a Spanish-version of the paper - but should not be counted as additional circulation because in almost every case it is making the publication thicker, not distributing to more subscribers. That would be the equivalent of a restaurant that's sold 10 burgers a day, but now 8 of those are deluxe burgers saying they are selling more burgers over all - they're not. They're selling bigger burgers, not more of them.

The newspapers circulation figures may have been boosted by other recent AAM audit rule changes, like inclusion of mobile apps access and digital non-replicas and/or paywall digital subscribers - but this type of reporting results in double-counting (or more!) a subscriber. A member of AAM's executive board referring to digital reporting actually admitted that their "rules in this area are pretty dense." You think?!? Newspapers seems to be picking and choosing what they audit to make themselves look good - and of course they each report it. What a racket!

It's been well-reported by Poynter  and others that AAM's reporting is virtually meaningless now. With all of the rule changes, there is no way to decipher trends, much less reality because you cannot compare to previous audits when the rules were different. A red flag was when they changed their name from Audit Bureau of Circulations. We should've known at that point that they would stop reporting actual circulation. And they have - with this report they stopped listing the Top 25 and previously stopped requiring newspapers with more than 50,000 circulation to report 5-day averages.

My biggest problem? I know better. As the print buyer, I manage an insert program for a client that runs in 200 newspapers, and I track circulation for all throughout the year. And news flash - circulation is falling, depending on the market, 5-10% year-over-year. Online growth/audience or whatever you want to call it does not matter to me because I am running inserts - and I'm losing that mass audience to prospect to via print with each lost subscriber. And replacing this lost audience with digital distribution has not worked as well - coupon redemption for this client is still higher through print than digital.

These audits are not fooling me. For me, this fuzzy math by AAM calls all of their reporting into question, which is what they do, right? If you're a reporting body, obviously reporting accurately matters - this was similar to Jeff's problem in the digital space. Faulty reporting erodes confidence so I no longer trust any of AAM's stats. Maybe they do not care - they are making most of their money from the newspapers that pay them to produce reports that make those same newspapers look good.* Perhaps that's the main problem - their business model requires them, if they are honest, to not only bite, but lop off the hand that is feeding them. This conundrum has caused them to change their reporting, effectively making them a joke - but they are still making money.... so I guess that's how they sleep at night.

Another beef of mine (as a former print ad rep), is my disappointment with the print industry as a whole. As an industry desperate for good news, they are just making it up. But that does not add credibility or trust which is paramount to growing as an industry -- both in advertising and journalism -- not made up PR. There are a lot of strong stories still in this industry - the strength of local reporting and advertising, papers providing connection within communities, and even some strong growth and innovation in the digital space. Newspapers just need to find that better story --which is what their newsrooms should be accustomed to doing-- and tell it. Instead they, and the AAM are preoccupied with propping up their circ figures as a smokescreen. Tell the truth - it's good journalism.

*That would explain too why the newspapers with the fattest budgets have the strongest audits, they have money to invest in new products and then can afford to audit more of those products and pad their numbers.