A couple of weeks ago, HBO announced that it would begin offering an over-the-top digital streaming subscription service in 2015 circumventing the cable bundle package where it is usually available exclusively.  They did not announce the price, but it will presumably be in the $7-9 per month Hulu/Netflix range. Not to be outdone, the CBS network announced the next day that it would be rolling out a similar subscription service called CBS All Access. 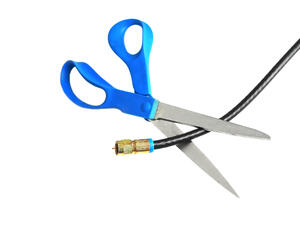 For $5.99/month, subscribers have access to streaming on-demand most CBS shows, including CBS Classics like Star Trek and Twin Peaks, and live-viewing via mobile and desktop in 14 markets. With CBS' model, only their classics are ad-free.

So why is this a big deal?

I think this move from two of the strongest TV content providers reveals a lot. It reveals that the streaming model is here to stay, and has certainly disrupted the marketplace. Remember when digital streaming on Netflix was free with your DVD subscriptions? And then all of the hoopla when overnight they flipped the switch and started charging the same amount for streaming (for new customers)? At the time Netflix said it was the future, and licensing fees didn't allow them to not charge for this portion of the service. Besides being a PR nightmare (re: Quickster), they were right for the most part. And Netflix digital streaming subscription base has slowly grown to over 50 million worldwide, boosted in large part by stellar original content like House of Cards and Orange is the New Black.

Now traditional TV studios and content creators are competing in a very real way with Netflix as cord-cutting has become more than just a passing fad. The best way to do that is by offering these competing digital services to access their premium content which they still own. Now it all makes sense why CBS has been the lone hold-out network to make its full content library available on Hulu. And why the Aereo legal fight went all the way to the Supreme Court is clear -- especially given the live-viewing aspect of All Access in 14 markets.  Remaining in control of their content allows them to monetize it to the max, and these types of services were clearly in the works and are a large part of that plan.

How will this affect the consumer?

On the one hand, this is great news. It's the first step towards a truly unbundled, a la carte low-cost cable option. The market has been wanting it, some congressmen have argued for it, but Big Cable is in the pockets of so many legislators there has not been any meaningful advancement. With the Aereo win, and cord-cutting becoming a very real threat, these over-the-top services are starting to make economic sense for these companies. Thus they are developing them.

Is it all good news for consumers who will have access to premium content at a low cost? Not so fast, my friend - as Lee Corso of ESPN would say. His network, and most sports programming will likely never make live sports available via streaming. Too much money on the table in league deals. And as this article notes, cable companies (who just happen to be the ISP for most consumers) will make their money by charging for greater bandwidth. For most consumers, what is saved on TV programming to some extent will be spent in charges for higher speeds. Don't worry - Big Cable will get theirs.

How will this affect advertisers?

Well, I see this as a very good thing as well for brands. The DVR conditioned viewers to watch programs on their own time frame and skip ads. Netflix has reinforced that on-demand, ad-free viewing experience, but is lacking in the live TV, or even next day content. So I see this as an evolution of the DVR and an extension of video-on-demand. CBS' model does include ads. If the other networks jump on-board and at a lower price point than Hulu as CBS has, consumers could shift to cutting the cord, buying the networks they want, and having an all on-demand viewing experience at a much lower rate. They also save on DVR cost (which is nominal).

Now the good news for advertisers is that brands can get in front of these audiences again. With 49% of homes having DVRs brands can't be certain their prime messages are being seen, but in this on-demand, digital streaming scenario ads cannot be skipped. As the success of Hulu has shown, consumers don't seem to mind since they are getting the premium content they want and live or next day; plus it's on a limited basis with short commercial breaks. Also, CBS' service will be Nielsen-measured allowing for more reliable data on viewership and viewers. For buyers this could mean increased targeting and even data-driven buying a la programmatic. The potential good media ideas abound!

Will this happen overnight, if at all? Not likely. There are still considerable hurdles, like sports programming I mentioned, and how the current eco-system supports the long tail of cable. But I do think this is a huge tipping point that could overhaul the whole industry, shifting brands and media buyers from thinking about buying dayparts to purely an audience regardless of time a spot is viewed. Telling in both announcements is why they are doing it: to reach viewers they are missing in current models. This is the way to grow and all networks and cable channels know that.  That's why I think this is a trend to watch.