Sometimes we do good in the world and it makes an immediate difference. That was the case with our contribution to help coordinate the wrapping of a trailer owned by the non-profit adapted sports team, Gwinnett Heat. The team used the trailer to transport the athletes' wheelchairs and equipment to games - until it was stolen over Christmas break. The trailer wasn't insured by the county. 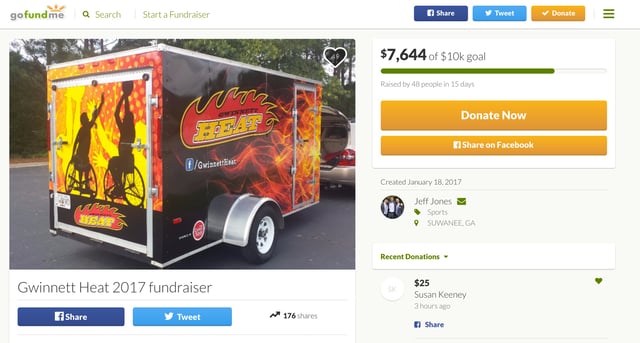 We are fighting back against this ridiculous crime. Our media director, Jeff Jones who volunteers with the Heat, set up a GoFundMe page to raise money to replace the stolen trailer. This news was recently covered on some local news stations as well. If you'd like to contribute, follow this link.

(featuring our very own, Jeff Jones)

Sometimes you have to do good again - and again and again - to overcome the bad in this world.

Update: The GoFundMe campaign -- and the subsequent news coverage due to it -- was so successful that the county decided to replace the trailer! All funds raised will go towards new wheelchairs and equipment - also a huge need for the team. Thanks to all who contributed.