We've been doing a series on the benefits of traditional media on the blog. You can catch up on earlier posts here and here. Why are we writing this? Because we are Luddites stuck in the dark ages, denying the existence of the internet? Not at all. It is because we are huge believers in media mix. No marketer should put all their eggs in one media channel basket. And with all the benefits that come through digital advertising - like trackability and measuring ROI - it also has its limitations and isn't the most trusted advertising medium. Yes, traditional channels still have value to reach your audience and enhance a digital advertising campaign. They all work together.

On to today's topic: Print. For years, everyone's been talking about the impending death of this media channel. As a former print ad rep during the very lean years of '08 and '09, I saw the media channel's strength diminish. There is no denying print media - both newspapers and magazines - are not as prevalent as they used to be. Almost weekly, we hear about another magazine going to online-only or layoffs at another newspaper due to tumbling ad revenue. Amidst all of this, how can this stalwart of Traditional Media still be a good media idea? Why should it be considered when developing a media plan?

Here are a few reasons: 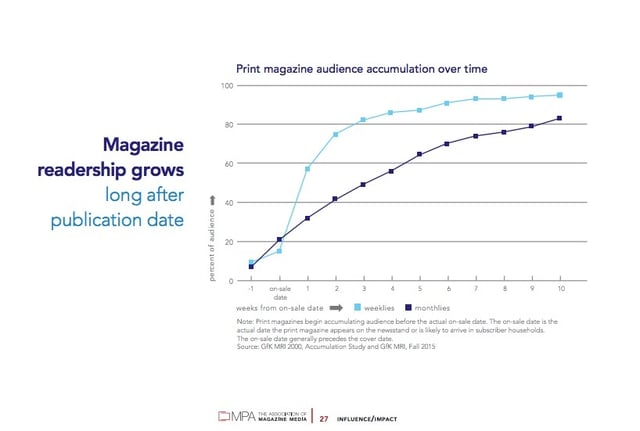 You can see more stats specific to magazine at magazine.org in their 2016/17 Factbook (yes, it's a magazine industry site, but most of the studies are independent).

That's our perspective on print advertising - and that concludes this series on the benefits of traditional advertising. Again, we are not old stodgy media types living in denial of our digital world. We're just saying there is still a place for traditional media depending on the goals of your advertising campaign. A good media agency is "media agnostic" - advising their clients on which media channels to use to best reach their prospects. A fully integrated media approach is still the best policy.