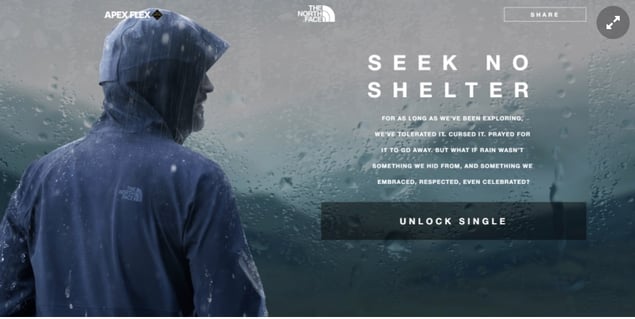 Here's a quote from The Drum article that shows how this idea fulfills the North Face's brand promise:

"'Our entire brand is based around the idea that adverse and changing conditions aren't just to be tolerated, they are what shapes a great life lived outdoors,' said vice president of marketing at the North Face, Tom Herbst.

'For this campaign, we want to change the way people think about rain – as not something to hide from, but something to be sought out and celebrated. Dropping a song only when it is raining is designed to delight, inspire and mimic the same sense of anticipation and excitement that you have when heading into the wild.'"

We like this tactic because it is an awesome example of "the medium is a message" - a song about rain only available when its raining to promote a rain jacket. It's a superb way to integrate a product in a subtle way and showcase the brand promise all via a popular medium - audio streaming and, more specifically, Spotify. You have likely read about other good ideas Spotify has recently executed. As a media agency, we have explored some of these ideas; but most of our consumer accounts need to reach a tight geography and scale becomes an issue with Spotify when you narrow the geography.