In the world of radio, we do not feel terrestrial radio is going anywhere, but there are some new interactive ways to extend the reach and frequency of your traditional radio buy. We are all familiar with online music streaming options, like Pandora and Spotify which are ad-supported but have premium subscriptions that allow you to pay to have limited or no ads. And although these services have been around a few years and each offer unique benefits, recently there have been some big players that have thrown their hat in the streaming ring, most notably Apple.

Their announcement last month introducing iTunes Radio caused quite a stir, because although they are late to the game, they could very likely dominate this world and very quickly. They have a larger footprint through iTunes than leader Pandora (limited to US, Australia and New Zealand) offer matching of current users’ songs, and reports are that the licensing deals are better for the record labels that others. Pandora, whose business model has been been widely reported as not quite working, should be worried. And it’s not stopping - Microsoft announced just a few weeks later they were joining the fray, too.

As I mentioned before, although there is huge growth in online radio streaming, the vast audience is still with over-the-air AM/FM. The chart below shows online listeners do not listen to radio online in lieu of terrestorial, but in addition to. (Do note that the base here is weekly online radio listeners, not online music streaming - a bit different, but worth looking at) 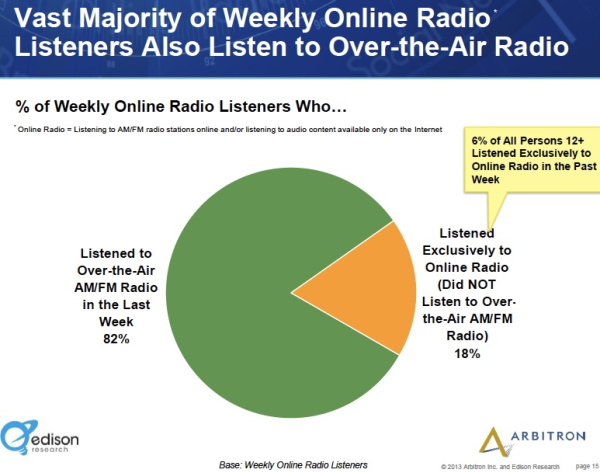 82% listened to traditional radio in addition to online, while 18% exclusively listen online. That's why adding some online radio ads is suggested to hit that segment of the audience you will not hit through traditional methods.

Apple’s iAds platform will also allow for better targeting, and this is where the Good Media Idea comes in. Advertisers will be able to serve ads not just based on geography, listening habits and gender, but also through what music, TV shows, movies and apps people have downloaded to their iTunes. This presents a huge opportunity for advertisers to create a buyer persona and target based on those entertainment interests.

What are your thoughts on this online music world? Leave us a comment and let us know.