The Effects of Ad Blocking

As the revenue allocated toward digital continues to increase, there is a new concern, not about available inventory, but about consumers Ad Blocking. A day doesn't go by that a new article doesn't appear in our inbox about this.

Ad Blocking is the automated removal of most forms of advertising from web pages, including everything from banner ads, text ads, sponsored links, sponsored stories and video pre-roll. These are executed through web browser extensions and companies like Adblock Plus.

PageFair, along with Adobe, published a report in August about Ad Blocking, and some of the numbers are a bit staggering and only going to grow:

Ad Blocking is really of function of audience demographics. The study found that websites that cater to young, tech savvy, or more male audiences are more likely to be effected by Ad Blocking. What Ad Blocking comes down to is the user wanting to tailor their own online experience, which has been over run with more and more ad units on web pages. 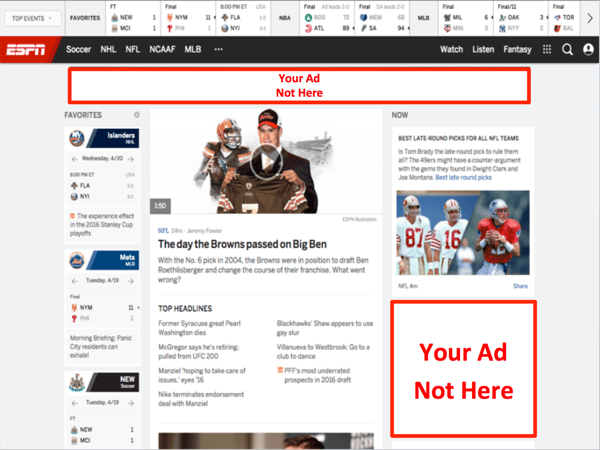 So what is the solution to this issue? One publisher, The Guardian, has already discussed blocking access to its content if a user has Ad Blocking software implemented on their computers. We would not be surprised if more publishers follow suit if the growth continues to rise. However, it is also a creative issue, as Scott mentioned in his recent blog, where the ads themselves need to be more engaging and more relevant to the user.

But who is to blame for the rise in Ad Blocking? Many believe that at the end of the day it is the publishers, who then turn around and blame advertisers who want more opportunities within the digital space beyond the traditional 300x250 banner ad. The rise of in-your-face, over-sized ad units are making the consumer experience unpleasant, causing more users to turn to Ad Blocking as a way to customize the online content they want to view.

So is this the end of digital advertising? Not really, it is not Armageddon. While it will have some effect, at the end of the day, website traffic and available websites in the US is so large that the effect will end up being very minimal. This is not as concerning as Ad Fraud, which affects our buys and audience delivery.

sWhat is the ultimate effect on media planning and buying? We could see the number of ad units reduced (creating strong user experience), which will lead to higher CPM's (supply and demand). That in turn will decrease the number of impressions delivered for the same budget a year ago. However, what we will gain is stronger, more targeted placements, hence ads that are more relevant to the user, creating a more pleasant online experience.

If you have some thoughts or questions about Ad Blocking, comment below and let's talk.